Our lives are nothing more than a collection of habits. From the time our feet hit the floor in the morning to the time our heads hit the pillow at night, our bodies employ these automatic routines to free up mental bandwidth to focus on novel challenges that require more of our brainpower to solve.

Without the ability to form habits, simple tasks like brushing our teeth or tying our shoes would be made exponentially more difficult by the fact that we’d have to think them through carefully every single time we did them. Our lives would quickly devolve into one mundane task after another in an effort to merely survive, and the complex civilization we take for granted as a result of our ability to form habits would cease to exist.

You’d be hard-pressed to name anything with more power to influence the success you realize in your career and life in general than the habits you develop along the way. The perils of developing bad habits are well-known, as are the great rewards that come from developing good ones. We all recognize that foundational habits like eating well, exercising and getting enough sleep can play a huge role in our ability to perform at our best, but there are plenty of other smaller habits we can employ in our day-to-day that can drive a huge impact on our output as well.

Here are three of my favorite small habits that can have a huge impact on your career:

1. Write your to-dos for the next day the day before

If you write out your action items for the day on a to-do list, congratulations — you’re already ahead of most people. But if you’re in the habit of writing out your to-dos for the day on the morning of that same day, you may want to rethink your approach.

For most people, mornings are the most productive time of day. Our minds are at their most creative in the morning, and we (usually) haven’t yet been sucked into the chaos of the day’s demands. That makes it the perfect time to put your focus toward tackling important, mentally taxing tasks that will only get tougher to complete as the day wears on.

When you write your to-do list in the morning, you waste some of your mind’s most productive capacity on a low-effort task that could just as easily be completed later in the day when your mind is more worn out. Your mornings should be spent directing as much of your focus and energy as possible toward hard tasks, not jotting down to-dos. So make it a habit to write your to-do list for the next day at the end of each day so you can dive immediately into your most important work as soon as you sit down at your desk in the morning.

2. Write out and track your goals 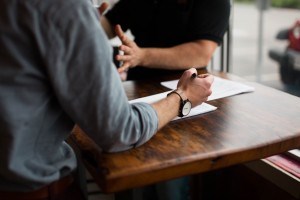 An oft-cited study of the Harvard M.B.A. class of 1979 found that while only 3% of the class had both written goals and concrete plans, that same 3% was earning 10 times more on average than the other 97% of the class just 10 years later.

A more recent study from 2015 found that when people wrote down their goals, they were 33% more successful in achieving them than those who had merely formulated loose goals in their heads.

Writing out your goals takes advantage of an aspect of human psychology known as consistency, which holds that once a person decides on something, they tend to behave in a manner consistent with that decision. Part of the reason we hate hypocrites so much is that their behavior flies in the face of the standards we expect decent human beings to abide by.

When you write down a goal, you’re essentially drawing a line in the sand which serves to hold yourself accountable to that goal. The mere act of writing down your goal transforms it from an ambiguous thought swimming around in your head to something real and tangible that you can see and touch. It might not seem like much, but it makes a big difference — when you’re forced to look at your goals every day, you’ll put more pressure on yourself to achieve them.

With a nearly endless list of possible commitments competing for our time and attention, developing the habit of saying no to many of them is crucial for keeping focused on what’s important.

It’s only human nature to want to say yes to things in an effort to appear nice and help people, but that becomes a bad thing when it sabotages our pursuit of happiness and fulfillment. Everything you say “yes” to is a “no” to something else, which is a problem if the things you’re saying no to include your health, family, relationships, and other important areas of your life.

Author and entrepreneur Derek Sivers uses a simple test to determine whether or not to say yes to something: If the decision doesn’t inspire an emphatic “YES!” then it’s a no. This frees up time to focus only on the things he finds most exciting and rewarding and cuts out all the fluff.

If you’re used to saying yes to most things, learning to say no will take some getting used to. In the long run, though, this habit will pay dividends in the form of much more time invested in the things that gratify and fulfill you.

How about you? What are some of your favorite small habits that have impacted your life and career in a meaningful way?

Are you interested in starting your new year with a new career opportunity? Search for your next career with Gartner here.

Gartner Gives Initiatives To Uplift The Community In India